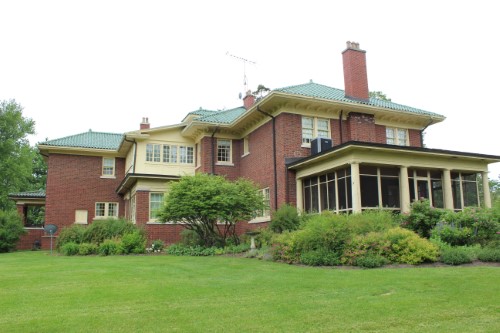 Indian Hill Manor and Farm is an example of a “country gentleman’s farm”, a rural retreat from the city that was popular among wealthy families during the early 1900s.

The manor is an example of early Colonial Revival architecture and includes many of the modern conveniences of the day. A built-in vacuum cleaner system, intercom, electric stove, and commercial gas dryer for laundry were all features of the house.

The landscape design of Indian Hill Manor integrated the buildings into the natural surroundings, enhanced the views of the river and forest, and emphasized the use of native trees and shrubs instead of the showy flowers and exotic plants that were popular in formal Victorian gardens at the turn of the century.

A formal sunken garden, with a classical fountain, pergola, and trellises was a counterpoint to the natural landscape of the grounds. The garden was planted with roses, irises, peonies, and other perennials. Mrs. Barrett held teas in the garden for members of the Rockford Garden Club and sponsored benefits to raise money for her favorite charities.

When Bill and Lucile Smeja moved into the manor it had been left unchanged since Esta Reed died in 1947. They began redecorating the rooms, added modern appliances to the kitchen, and a shower to the master bathroom. They filled the empty rooms with period furniture purchased from estate sales in the Chicago area.

The Smeja Homestead Foundation’s first task was to repair and restore the manor and coach house to their original condition, including refinishing the original porch furniture and reacquiring as much of the original furniture, glassware, and silverware that could be obtained.